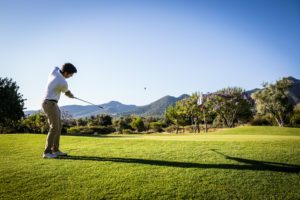 For the second consecutive year the Wilson Tournament arrives at Lauro Golf Resort. This event, which was already a successful participation last year, will be held under the individual stableford format and will award the three best players from three categories. On the one hand, two masculine categories and, on the other hand, a feminine category. Also, the player with the least strokes during the round of golf will win the prize, obtaining the Scratch prize.

Of course, there will be special prizes for the longest driver, and the closest to the flag on one of the par three on the course. For those who do not manage to access the prizes through the result, they will be able to take home a souvenir in the draw, which will feature an important list of prizes.

This tournament follows the determined line of golf development among the amateur players that Lauro Golf Resort has been working on for years. A social event, just like we already had on June 20 with the San Juan Tournament, which will be complemented by the celebration of several championships of the Royal Andalusian Golf Federation such as the Andalusian Championship Benjamin, Alevín and Children on days July eleven and twelve or the Andalusian U-18 Championship from August seven to nine.

You can proceed with registration at the Lauro Golf Resort offices, by calling 952 412 767 or by email at info@laurogolf.com