Nobody could have stopped England’s Tom Shadbolt from winning his maiden title. A 60 meter shot holed followed by a hole in one crucified his closest opponent Santiago Tarrio. 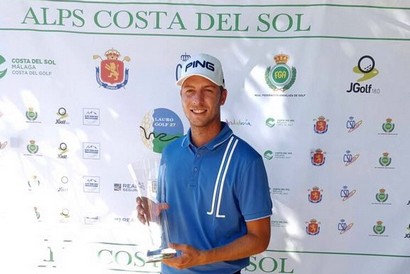 Shadbolt, 28, is among the very solid players on Alps Tour. His best result so far was a 2ndplace in Italy in 2014 where he missed by nothing a win. He recorded two runner up places last season and had climbed twice on the third step of the podium in 2016.

But on that day, the golf saints were English and the player from London was as accurate as a sniper on back to back holes. He first holed a 60 meter shot for eagle on the 13th to go for -6 then he holed his 7 iron shot on the following par 3 for a hole in one and -8. He completed his round with an extra birdie on the 17th to win by a nice margin of three shots over Santiago Tarrio. Nicolas Tacher and David Borda are tie for third place.

His fellow countryman, Matt Wallace, was in of the first on social media to congratulate Shadbolt. With this win, he enters the Alps Tour top 5.

Spain’s Santiago Tarrio, 25, will have a narrow advantage heading to Alps de Costa del Sol final round with -10 total. The young man signed for 69 thanks to 6 birdies and 3 bogeys. There are two men only one shot back, France’s Nicolas Tacher and England’s Tom Shadbolt.

There are only 3 tournaments left to complete the 2016 Alps Tour season. Matt Wallace has already secured his category to play on Challenge Tour next year, at least. The battle behind to grab the 4 spots left is very tight and the final ranking can really move until the last event.